The only thing to rely on when hiking in the mountains is unpredictable weather… When we visitied the Canadian Rockies in May for a hiking trip, we expected to be out in snow, rain and the maybe the occasional sunshine – 25+ C° in spring certainly wasn’t to be expected!

The scenery was nothing but beautiful, fresh green leaves and fast flowing mountain run-offs everywhere. After stocking up food in Calgary, we headed off to Banff to visit Johnston Canyon early the next day. The Canyon is quite a famous spot so we expected it to become busy during the day – visiting early is highly recommended as it really filled up on our way back around noon. Regardless if crowded or not, the canyon’s worth visiting to get an impression of the power of water that has carved it’s way through the limestone walls.

Leaving Johnston Canyon and the scenic Bow Valley Highway behind we headed on to Yoho Nationalpark for the first backcountry hike. Despite the unusally warm temperatures in the valley, the track up to Yoho Lake was deeply snowcovered once we entered the forest at higher elevation. As a matter of fact, Parks Office told us we’d be the first visitors in season at Yoho Lake (if we’d make it throug the waist deep snow)!

Entering the forest area between Michael Peak and Wapta Mountain at around 1.800m elevation, the hike almost turned into a route finding trip because the path to was completely snow-covered. All in all though, it’s not hard to find the lake if you‘ve got a map and know how to use it.

The view towards Wapta Mountain was always interesting – when the sun went down it started to get freezing and all the snow that had been melting all day long re-froze during the night.

A couple of meters from the lake shore, we found a nice snow-free spot to set up our camp. Who thought we’d be seeking shade when hiking the Rockies in spring!

Despite being not the most economic way to gain drinking water, we had to melt snow during our stay at Yoho Lake.

The night was freezing but it was so much worth the effort! Back in the valley at Emerald Lake we took advantage of the phenomenal weather and took an early season dip in the Lake, which of course was freezingly cold but super to wash off the sweat of the day’s hike!

After Emerald Lake, we stopped over at the Natural Bridge that spans over Kicking Horse River. Another nice spot but due to it’s easy accessability heavily crowded with tourbus folks.

Even though early season conditions restricted doing hikes like the Iceline or Lake O’Hara, visiting Yoho really payed off, especially for having that beautiful Yoho Lake area all to ourselves.
As the weather was supposed remain good for the next couple of days, we quickly went on to Mt. Robson Provincial Park. In spring, the valley are teeming with wildlife and we were lucky to see a good number of bears, bighorn sheep and other beloved critters. Just a gorgeous time of the year!

Arriving at Mount Robson park, the first glimpse at Robson from Park’s visitor center already looked promising for the next day’s hike.

After a couple of km on the track, Kinney Lake with its beautifully set camping area would make up for a nice overnight hike itself. Hiking on, it does get better and better, though

The track steadily climbs and the next nice place to have a break is Whitehorn campsite, again beautifully set on the banks of Robson River. Icing on the cake is a nice swing bridge that leads to the Valley of 1000 waterfalls and Whitehorn.

The valley is a good stroll as the track is mostly even and level. However, the hardest part is yet to come! A small sign at White Falls hints at what’s waiting behind the next corner.

Most of the elevation to Berg lake is done on the following 4 km – steep, but easily doable if you take your time.

Nice views all the way make the walk to Berg lake an easy ascend – one of the most stunning spots is found by a short detour off the main track: Emperor Falls, rushing down the western slopes of Mr. Robson.

Close to the falls is Emperor Falls campsite, again nicely set by the river but unfortunately still completely snowcovered. Still worth a quick lunch + photo stop, though!

Behind Emperor Falls, the trail slowly flattens and leads to a beautiful high elevation valley tucked between Whitehorn Peak and the Robson / Helmet massive. Approaching Berg lake, the scenery changes from forest to open scree terrain with Mist glacier to your right. Beyond Whitehorn, we didn’t meet any other people which gave this area an almost private atmosphere – one of the advantages when hiking in shoulder season.

Behind a small hill, the views open up on Berg lake and the stunning Berg glacier with Rearguard Mountain in the background

Quickly, we set up tent + and hammock at Marmot campsite and just admired the scenery…

After a 20km uphill hiking, it’s alright to have some whiskey with glacier ice, even when the sun is still out? We watched the Harlekin ducks chasing each other around and time passed by quickly.

Berg lake is a hiker’s and photographer’s paradise (for the latter even you have to deal with boring blue skies every day..), and around sunset and sunrise the lake reveilled some nice reflections.

Marmot campsite is conveniently located at the edge of a (young) forest that provides enough shelter to seek shade from the ever-burning Rockies spring-sun! Hanging around in the hammock with glacier view wasn’t that bad, either

As in any maintained backcountry campsite in the Rockies, the Berg lake sites are usually equipped with food lockers. We didn’t have to worry about bears crossing our paths up at the lake (at least we didn’t find any signs), but the gang of ground squirrels posed a constant threat of raiding our food supplies! Who ever uses hiking boots as a salt lick must be desperate and surely doesn’t have a problem gnawing its way through the walls of a tent to get some cockies?

Next day we went for a day hike to explore the area around Robson glacier and Tobbogan falls. As the paths around the lake were still snowcovered, gaitors came in handy.

Scrambling through the snow to Tobbogan falls was one of the best short detours in the area. Due to deep and constantly melting snow going any further wasn’t possible – but just sitting on the warm rocks watching the waterfall rushing towards Berg lake still was a great sight 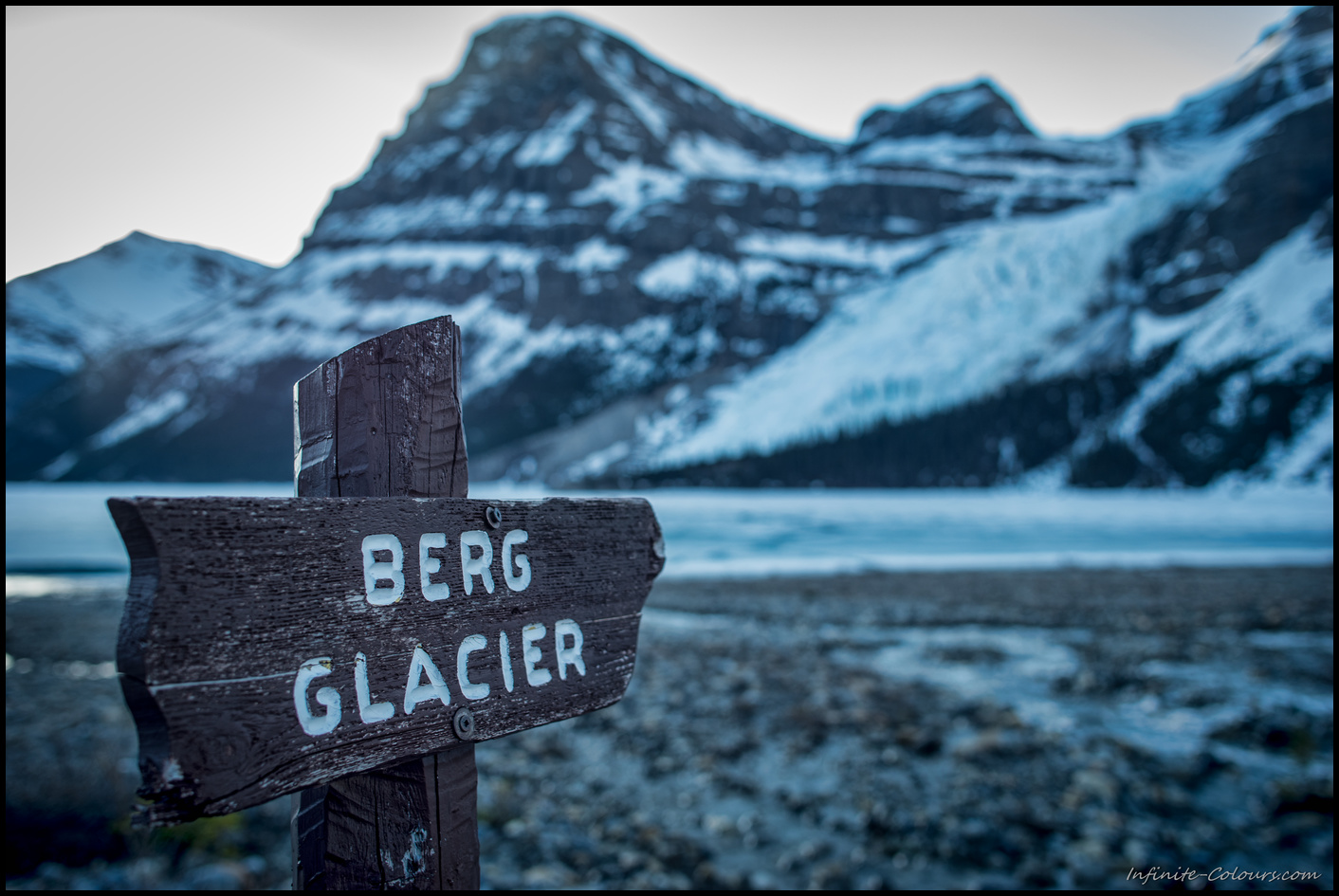 Getting ready early on day 3 on the trail, we prepared to walk back 19km mostly downhill to the car park

So far, we’ve been blessed with summer-like temperatures and constant sunshine. We had a nice day in Jasper before heading on to the Windermere Valley to enjoy some hotsprings and to see if we could make it up the famous Bugaboo Provincial park. Again, we took the Icefields parkway route to soak in the amazing mountain views. We found a nice picknick spot close to Saskatchewan River Crossing –  the last stop of our trip in good weather!

Soon after lunchbreak, the rain started pouring down. Despite the bad weather, we wanted to see Peyto lake because we’ve heard it would be likely to be already free of ice. At the viewpoint, we had an amazing view of Peyto lake as the bad weather front was still in sight while the sun started to battle through the clouds giving the lake an almost unrealistic, fluorescent colour. 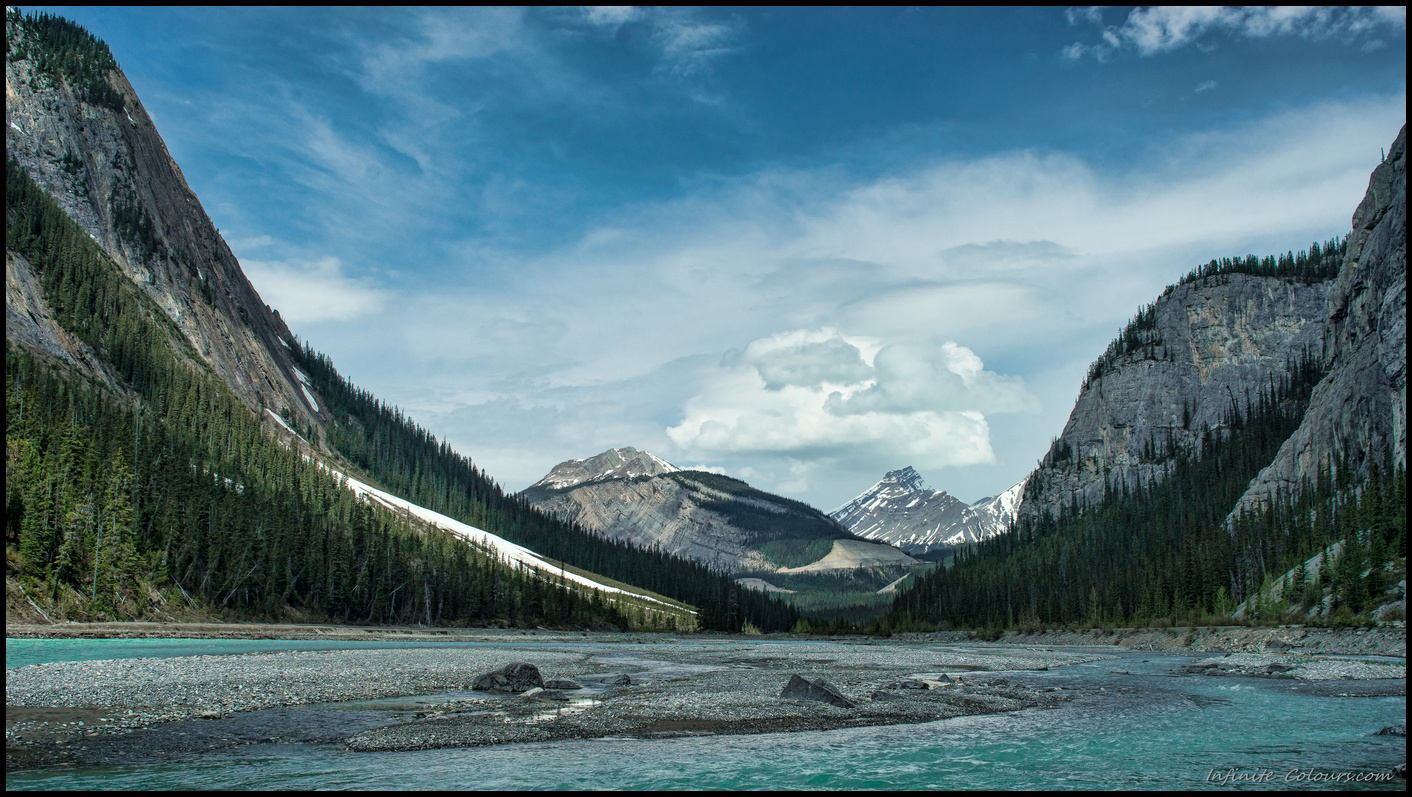 After arriving in Radium, we opted to stay in a hotel for the night as the weather was supposed to get worse during the night. As soon as we we got comfortable in our room, a heavy rainstorm, that surely would have tested the limits of our tent, began. If we’d been at the Bugaboo campsite already, we might have gotten into trouble. Next day was nice, but still much water on the dirtroads to Bugaboo. After debating for a while whether we should take the risk of potencially wrecking our sedan rental car or to leave in peace finally decided to give this one a miss.. See you next time!

Hence, we went off to soak in some of the Hot Springs in the area, specifically Lussier hotsprings and Ram Creek warm springs. The campsite at Alces Lake was nice and a good base to visit Lussier in the evening and early morning, when it’s much less crowded than during the day.